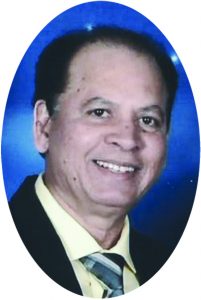 It is with great sadness we announce the passing of Milton D’Mello on Friday, June 12, 2020 at the age of 63 to cancer.

He is survived by his wife, Charmaine, two sons Marlon and Conrad.

Milton was a wonderful, joyous man with a humble heart and an easy laugh. He was admired and greatly loved by his family, friends and colleagues. Milton was born in Karachi on November 30th, 1956 but shortly after moved to India where he spent his early life. Milton would follow his adventurous nature to Bahrain where he would meet his wife Charmaine and start a family. In 1996, he moved to Canada looking for a better life for his family. Along the way, he made many cherished relationships and connections in India, Bahrain, U.A.E, Australia, UK and Canada. He excelled and took pride in his work within the Food service and Aviation industries.

Milton had many passions and interests; he enjoyed picnics with friends, creating music playlists, travelling, playing board or card games and watching movies, especially the Marvel series

Milton will be laid to rest at Assumption Catholic Cemetery. His “Celebration of Life” will be determined at a later date.

In lieu of flowers, donations can be made in Milton’s name to the Carlo Fidani Regional Cancer Center at http://thcf.convio.net/goto/miltondmello.