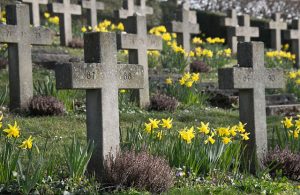 97% of Cambodians follow Theravada Buddhism. Central to Buddhism is a belief in reincarnation, and Cambodia is no exception. Unlike in Western countries, death is seen as the beginning of a new and better life for the one who passed away. Buddhist are cremated, and their ashes are kept in a temple stupa.

The families of the deceased hang white crocodile flags outside their homes as a sign that their loved one has passed; they also do this during funeral programs. These crocodile flags are essentially crocodiles drawn onto the white cloth or white cloth that is cut into a crocodile shape. They can sometimes come in other colors. This tradition is unique in Cambodia, and this started when a crocodile ate a princess. The King gutted the crocodile and hung up its skin. Afterwards, Cambodians began hanging crocodile skins outside of their homes after a loved one’s death. Over time, they switched from real crocodiles to symbolic ones.

Despite Laos being 66% Theravada Buddhist, a large segment of the population follows Laotian folk religions, which are Animist. In many areas of the country, Theravada Buddhist beliefs blend with Animist beliefs, like beliefs in phi or spirits that pervade daily life. Spirits exist in homes, people, rivers, animals, and plants, and can be malevolent or benevolent. An example of this religious fusion can be seen in regions where Buddhist monks exorcise bad spirits. Funerals keep to Buddhist tradition. The body of the deceased is kept for days, and during this time, relatives and friends will visit to pay their respects and to help the deceased’s family. These guests will often stay overnight, playing card games and eating foods, and some funerals can even be loud and lively affairs.

The majority of Thai are Buddhist, and their funeral ceremonies adhere to Buddhist tradition. Funerals last anywhere from seven days to even a year, much longer than in Western countries. A funeral rite’s complexity corresponds to the age and importance of the deceased, so an old and respected person would have more elaborate funeral rites than someone who died young and unknown. Funerals of high-status people in Thailand are expected to entertain guests, and their ceremonies often include theatre, but nowadays, this cultural requirement has faded in many areas of Thailand.

When a person approaches their death, they are encouraged to chant Buddha’s name or scripture as their dying words. This is a common tradition in Buddhist countries because it is believed your next life will be better if you make a strong connection to Buddha at the time of your death.

In the evening of the funeral’s first day, close family members and friends of the deceased gather to pour holy water on the deceased’s hand in what is known as the bathing ceremony. Afterwards, the deceased is placed in a coffin and taken to a Buddhist temple. Over the next seven days, monks are invited for daily chanting sessions. The family of the deceased may choose to cremate their loved one after seven days, or they can wait for a year.

The guidance of the soul of the deceased after death is a matter of great importance in Myanmar. It is said that for the first six days after the host has passed on, the soul has not yet accepted that they have died. Until the soul does, the family members must open all windows and doors of the house and keep vigil at night. Relatives also place ferry toll or coin in their loved one’s mouth to pay for their passage to the afterlife, and a monk visits on the first day after death to chant prayers that will keep the soul safe on its journey.

On the third day of the funeral, the body is cremated, though burial is more common in rural areas. The family of the deceased will receive lots of gifts from funeral guests like money, food, and flower wreaths. On the seventh and final day of the funeral proceedings, the family of the deceased hold a meal for the monks. Soon after this, they hold the Buddhist water libation ceremony, in which throwing water symbolizes throwing away one’s mortal life, allowing the soul to accept that they cannot return any more.

In Indonesia, funerals are an important ritual that takes the spirit of the deceased into the afterlife. There is a wide range of customs for burials according to which religion and island you are from. For instance, in Java, funerals are held on Thursday night with the only family in attendance. Often, the Java conduct secondary rites of passage for the dead soul. Muslims bury their dead within 24 hours of the death. Christians and Muslims are buried in separate cemeteries and are conducted by their own religious figures. While burial is the most common form of ritual in Indonesia, Hindus in Bali usually perform the cremation.

What should you not put in a eulogy?
What to Give a Grieving Family
What is the most played song at a funeral
“Have I Told You Lately” (Rod Stewart or Van Morrison)
Help You Can Offer The Bereaved After The Burial
Famous people who passed away in 2018
Angel By Sarah Maclaughlin
How To Create a Great Funeral
Fascinating Funeral Tradition Around the World God only cries by Diamond Rio
Scroll to top